The FAP - Friends of Autistic People
The Spirit of Greenwich Award 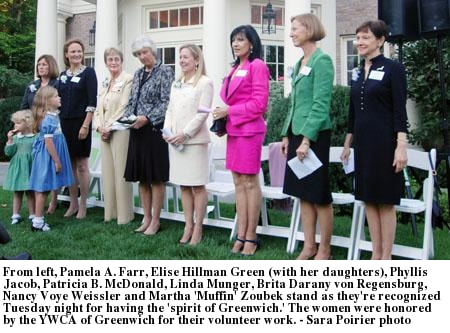 The Spirit of Greenwich Awards seeks to recognize and honor women volunteers in vision, devotion and accomplishment that enhance our community,” said Chris Hikawa, chairwoman of the YWCA Board of Directors, just before introducing the recipients at Tuesday’s ceremony.

As each recipient was introduced to the crowd of more than 100, each expressed gratitude to the organizations to which they had and continue to serve, as well as the people who helped them along the way.

The latest initiative of FAP is to create the first farm living and learning academy village for grown autistic children in Connecticut. Ms. Darany von Regensburg has also been involved with Kids in Crisis, the Greenwich Library Flinn Gallery, the Red Cross, Greenwich Hospital, the Bruce Museum, Greenwich ARC, and many other groups locally and regionally.

​She and her husband, Tibor, were honored as Greenwich Volunteer Couple of the Year by the Volunteer Center and the United Way of Fairfield in 2005.