The FAP - Friends of Autistic People
"Women of Spirit" Award 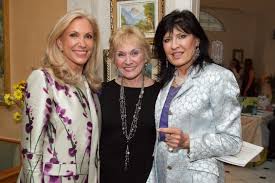 Morton's The Steakhouse and the Fairfield County Chapter of the American Red Cross, along with the world's leading women in wine, will honor Brita Darany of Greenwich at an exclusive wine dinner to be held August 10th at Morton's The Steakhouse in Stamford. Ms. Darany is being honored as Stamford's "Woman of Spirit", a woman who reflects values and principles similar to the mission of the American Red Cross, and who demonstrates an exceptional commitment to volunteerism and service. She is founder and president of the grassroots organization, Friends of Autistic People (FAP).

Ms. Darany is one of 38 "Women of Spirit" selected by Morton's The Steakhouse and the American Red Cross who exemplify the spirit of the founder of the American Red Cross, Clara Barton. Bonnie McElveen-Hunter, Chairman of the Board of the American Red Cross, notes, "Over 125 years ago, Clara Barton founded the American Red Cross on the battlefield of the Civil War. She was a woman of dedication and commitment who helped so many in their hour of need and she had an unyielding spirit. The American Red Cross is very honored to be Morton's national partner to highlight the power of women like Clara Barton who selflessly volunteer and serve others in their community." In September, the 38-city campaign will conclude with an "all-star" gala event honoring the American Red Cross, in Washington, DC, at the Morton's in Georgetown, which will be celebrating its 25th anniversary.
​
Mother of an autistic adult daughter, Vanessa, Ms. Darany founded FAP in 1999 when she realized no services were available to meet the needs of autistic adults. Through perseverance and hard work, she has made FAP an effective, well-known, well-supported entity in the local community. Her dedicated lobbying efforts have succeeded in fulfilling her advocacy efforts at local, state and national levels. In 2000, FAP collaborated with the Connecticut Department of Mental Retardation to plan and open its first autism-focused group home in Fairfield County. Friends of FAP and speakers at FAP parents meetings have included Connecticut Attorney General Richard Blumenthal, Congressman Chis Shays, Senators Chris Dodd and Joe Lieberman.